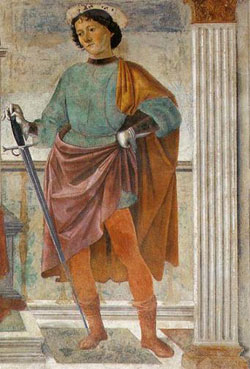 Patron saint of boatmen, innkeepers, and travelers, also called "the Poor." Reported in the doubtful Golden Legend, Julian slew his noble parents in a case of mistaken identity. He believed his wife was with another man and struck them both. His wife returned home from church soon after. In penance, Julian and his wife went to Rome. Returning after receiving absolution, Julian built an inn and a hospital for the poor. He even put a leper into his own bed. That leper was an angel.