And another Saint for Monday 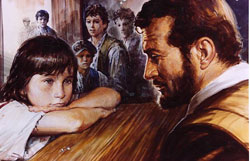 Jerome Emiliani lay chained in the dark dirty dungeon. Only a short time before he had been a military commander for Venice in charge of a fortress. He didn't care much about God because he didn't need him -- he had his own strength and the strength of his soldiers and weapons. When Venice's enemies, the League of Cambrai, captured the fortress, he was dragged off and imprisoned. There in the dungeon, Jerome decided to get rid of the chains that bound him. He let go of his worldly attachments and embraced God.

When he finally was able to escape, he hung his metal chains in the nearby church of Treviso -- in gratitude not only for being freed from physical prison but from his spiritual dungeon as well.

After a short time as mayor of Treviso he returned his home in Venice where he studied for the priesthood. The war may have been over but it was followed by the famine and plague war's devastation often brought. Thousands suffered in his beloved city. Jerome devoted himself to service again -- this time, not to the military but the poor and suffering around him. He felt a special call to help the orphans who had no one to care for them. All the loved ones who would have protected them and comforted them had been taken by sickness or starvation. He would become their parent, their family.

Using his own money, he rented a house for the orphans, fed them, clothed them, and educated them. Part of his education was to give them the first known catechetical teaching by question and answer. But his constant devotion to the suffering put him in danger too and he fell ill from the plague himself. When he recovered, he had the ideal excuse to back away, but instead his illness seemed to take the last links of the chain from his soul. Once again he interpreted his suffering to be a sign of how little the ambitions of the world mattered.

He committed his whole life and all he owned to helping others. He founded orphanages in other cities, a hospital, and a shelter for prostitutes. This grew into a congregation of priests and brothers that was named after the place where they had a house: the Clerks Regular of Somascha. Although they spent time educating other young people, their primary work was always Jerome's first love -- helping orphans.

His final chains fell away when he again fell ill while taking care of the sick. He died in 1537 at the age of 56.

He is the patron saint of abandoned children and orphans.