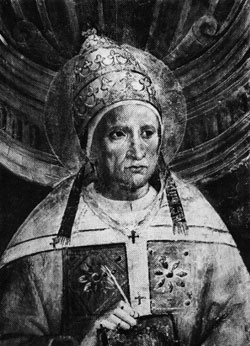 Eusebius, born just a few years after Fabian's death, tells us how Fabian came to Rome after Pope Anteros died in 236. A layperson, and not a very important one, he may have come for the same reason many still come to Rome today during a papal election: concern for the future of the faith, curiosity about the new pope, a desire to grieve for the pope who had passed. Seeing all the important people gathered to make this momentous decision must have been overwhelming. Which one would be the new pope? Someone known for power? Someone known for eloquence? Someone known for courage?

Suddenly during the discussion, a dove descended from the ceiling. But it didn't settle on "someone known" for anything at all. The dove, according to Eusebius, "settled on [Fabian's] head as clear imitation of the descent of the Holy Spirit in the form of a dove upon the Savior." There must have been something of the Holy Spirit working because everyone suddenly proclaimed Fabian as "worthy" to be pope and this stranger was elected.

To us the dove signifies peace, and this dove was prophetic. Starting close to Fabian's election, the suffering and persecuted Church began a time of peace. The emperor, Philip, was friendly to Christians and not only was the persecution stopped but Christians experienced acceptance.

In this era of peace, Fabian was able to build up the structure of the Church of Rome, appointing seven deacons and helping to collect the acts of the martyrs.

But, in a timeless story, the people who had always been in power were not happy to see the newcomers growing and thriving. There were many incidents of pagans attacking Christians and when Philip died so died the time of peace. The new emperor, Decius, ordered all Christians to deny Christ by offering incense to idols or through some other pagan ritual.

In the few years of peace, the Church had grown soft. Many didn't have the courage to stand up to martyrdom. But Fabian, singled out by symbol of peace, stood as a courageous example for everyone in his flock. He died a martyr in 250 and is buried in the Cemetery of Calixtus that he helped rebuild and beautify. A stone slab with his name can still be found there.