January 8th: Our Lady of Prompt Succor; a special devotion in New Orleans 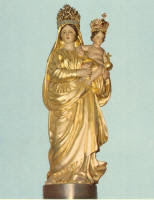 French Ursulines arrived in New Orleans in 1727 and established the oldest school for girls currently operating in what is now the United States. During a period of crisis after a large group of nuns left New Orleans for Cuba in 1803, Mother St. André Madier, one of the seven nuns who remained, appealed to her cousin, an Ursuline in France whom the reign of terror had forced to leave her monastery at Pont-Saint-Esprit. She was Mother St. Michel Gensoul, a remarkable woman of great talent and interior piety, who, during her exile in Montpellier, opened a boarding school for girls there. Fearing for the flourishing school, Bishop Fournier refused her request to leave, saying that only the Pope, then a prisoner of Napoleon, could give such a permission. One day while praying before a statue of the Blessed Mother, she was inspired to say, “O most holy Virgin Mary, if you obtain a prompt and favorable answer to my letter, I promise to have you honored in New Orleans under the title of Our Lady of Prompt Succor.”
The promise evidently was pleasing to the Blessed Mother. Two favors were granted: the letter which left Montpellier on March 19, 1809, received a reply from Rome dated April 28, 1809. The letter of the Holy Father praised her generosity and faith and approved her departure. Thus the answer was both prompt and favorable. Bishop Fournier, surprised at the outcome, asked to bless the statue which Mother St. Michel was having sculpted.
Since the end of December 1810, when Mother St. Michel, her companions and the statue arrived in New Orleans, devotion to Our Lady of Prompt Succor has grown in New Orleans and Louisiana, and has spread through the United States and even beyond. In the late 19 century Pope Leo XIII granted the solemn crowning of the statue, an honor carried out splendidly by Archbishop Janssens on November 10, 1895. In 1912 this devotion was officially approved by Rome.
From conversations, letters, contributions, requests for Masses of thanksgiving and similar sources, generations of Ursulines and friends of Our Lady of Prompt Succor have learned about many of the favors granted through the intercession of Our Lady in response to pleas for quick and favorable help. We will never know them all. But those we know are a source of encouragement and hope to all who count on Our Lady’s help.
Among them, two interventions of Our Lady in particular come from early New Orleans as important to the city and its people. The first has to do with one of the great fires which periodically threatened the city, the Ursuline Convent included. Frightened residents joined the sisters in the convent chapel, begging Our Lady to save them and their homes from the raging wind and flames. Finally, as the blaze drew too near, the Superior ordered all to evacuate the building. Before leaving, one of the sisters put a small statue of Mary with her Son into a window facing the approaching fire, with the prayer, “Our Lady, unless you hasten to save us we are lost!” Then she followed the others to safety. Within minutes, the wind turned back on itself, and in a short time, the fire had lost its momentum and burned out, leaving the remainder of the city unharmed.
The second well-known intervention of Our Lady of Prompt Succor concerns the Battle of New Orleans, January 8, 1815. During the night of January 7, Andrew Jackson and his relatively small, little-prepared and ill-equipped band of soldiers organized their defenses against the large, very well equipped British army which would attack the city before dawn. At the same time, many citizens not directly involved in the army joined the Ursuline Sisters in an all-night vigil in their chapel on Chartres Street, imploring Our Lady of Prompt Succor to give the victory to Jackson for the United States, saving the city of New Orleans from British control. During the night, the Superior, Mother Ste. Marie Olivier de Vezin, promised Our Lady that if Jackson and his men won, a Mass of thanksgiving would be sung every year in memory of her saving help to the city on that day. As dawn was breaking, Fr. DuBourg began a Mass for the same intention. At the very moment of the Communion a courier rushed into the chapel announcing that Andrew Jackson and his men had won the victory, and the Mass ended with the joyous singing of the Te Deum
Posted by Deacon Mike Talbot at 4:53 PM

Labels: Archdiocese of New Orleans, Feasts of the Church, Mary