Founder of the Ursulines is Thursday's Saint of the Day

Feastday: January 27Patron: of the sick, disabled and physically challenged people and those grieving the loss of parentsBirth: March 21, 1474Death: January 27, 1540Beatified: April 30, 1768 by Pope Clement XIIICanonized: May 24, 1807 by Pope Pius VII 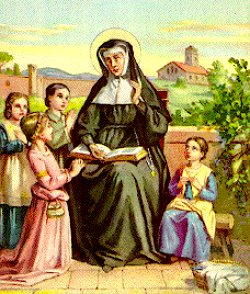 St. Angela Merici was an Italian religious educator and founder of the Ursulines whose deep prayer life and relationship with the Lord bore the fruit of mystical encounters with God. She was born on March 21, 1474 in Desenzano, a small town on the shore of Lake Garda in Lombardy.

At just 10-years-old, Angela and her older sister became orphans and went to live with their uncle in Salo. There they led a quiet and devout Catholic Christian life. After the untimely death of her sister, Angela was saddened by the fact the that she had not had the opportunity to receive her last Sacraments and was concerned for her sister's eternal salvation.

Angela was inspired by the Holy Spirit to dedicate herself to the Lord and to give her life in service to the Church to help everyone grow closer to the Lord. Still filled with grief, she prayed for God to reveal the condition of her deceased sister's soul. In a vision, she learned her sister was in Heaven with the company of saints. She became increasingly more devout and joined the Third Order of St. Francis where she also pledged to remain a consecrated virgin, forsaking marriage to one man to be married to the Lord and His Church.

When Angela was 20-years-old, her uncle died and she returned to Desenzano. She found that around her hometown there were many young girls who had no education and no hope. Her heart was moved. She also became distressed by their ignorance and upset at the parents who had not educated them.

Inspired by the Holy Spirit, Angela became convinced there was great need for a better way of teaching these young girls. So, she opened her own home to them and began to teach them herself. She devotedly taught them the Catholic Christian faith. By her example and instruction, she taught them to how to pray and participate in the sacramental life of the Church. She evangelized and catechized these young girls, opening them up to the life of grace.

Another vision from the Lord revealed to Angela that she was to found an institution with other consecrated virgins to further devote their lives toward the religious training of young girls. These women had little money and no power, but were bound together by their dedication to education and commitment to Jesus Christ and service to His Church.

Living in their own homes, the girls met for prayer and classes where Angela reminded them, "Reflect that in reality you have a greater need to serve [the poor] than they have of your service."

Angela's charming nature and natural leadership qualities made this a successful endeavor. She was so successful she accepted an invitation from the neighboring town, Brescia, to establish a similar school there.

In 1524, she eagerly took on the opportunity to travel to the Holy Land. During the journey, she was suddenly struck with blindness while on the island of Crete. This didn't stop her though; she continued the journey with as much enthusiasm as she would have if she had her vision. She made the entire pilgrimage and visited the sacred shrines. On the journey back home, her sight was miraculously restored while she was praying before a crucifix in the same place where she had become blind. The Lord showed Angela through this experience that she must never shut her eyes to the needs she saw around her ? to not shut her heart to God's call.

During the Jubilee year in 1525, Angela traveled to Rome to gain the special grace of the plenary indulgence offered to all Christian pilgrims. Pope Clement VII had heard of Angela and her great holiness. He noted her wonderful success as a religious teacher for young girls and invited her to stay in Rome. Angela was humble, disliked publicity and kindly declined the generous offer.

Though she turned him down, perhaps the pope's request gave her the inspiration or the push to make her little group more formal. Although it was never recognized formally as a religious order in her lifetime, Angela's Company of Saint Ursula, or the Ursulines, was the first group of women religious to work outside of the cloister and became the first teaching order of women in the Catholic Church.

On November 25, 1535, Angela gathered together 12 young virgins and laid down the foundation for the Order of the Ursulines at a small house near the Church of St. Afra in Bresica with Angela's Company of Saint Ursula, under the patronage of St. Ursula.

Angela's goal was to elevate family life through Christian education for women ? the future wives and mothers. The community she founded was different than many of the religious orders of women which existed in her day. She believed it was important to teach the girls in their own homes with their own families. One of her favorite sayings was, "Disorder in society is the result of disorder in the family."

Though the women in the community wore no special religious habit and took no formal vows, Angela wrote a Rule of Life for those who lived and served in the community of women. They did pledge to live a life of consecrated celibacy, poverty and obedience. They lived this Rule of Life within their own homes.

This was the first group of consecrated women to work outside of a formal cloister or convent in her day and became the first teaching order of women in the Catholic Church. The community existed as what is called a "secular institute" until years after Angela's death.

The Ursulines opened both schools and orphanages and in 1537, Angela was elected "Mother and Mistress" of the group. Her Rule was officially approved by Pope Paul III in 1544 and the Ursulines became a recognized religious community of women with a teaching ministry.

Before her death, Angela reassured her Sisters who were afraid to lose her in death: "I shall continue to be more alive than I was in this life, and I shall see you better and shall love more the good deeds which I shall see you doing continually, and I shall be able to help you more."

St. Angela Merici died on January 27, 1540. Clothed in the habit of a Franciscan tertiary, Angela was buried in the Church of St. Afra in Brescia.

Angela is often attributed with a cloak and ladder.

She is the patron saint of sickness, disabled and physically challenged people, and those grieving the loss of parents. Her feast day is celebrated on January 27.