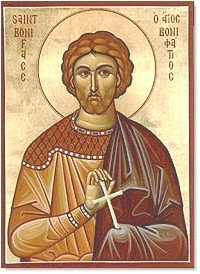 Boniface I Ordained by Pope Damasus I, St. Boniface was a priest at Rome and served as papal legate to Constantinople under Innocent I. When Pope Zosimus died in December, 418, a majority elected Boniface pope, and a minority elected Eulalius pope. Pope and antipope were consecrated on the same day. The Council of Spoleto was convoked in 419 to settle the dispute. Symmachus the Prefect supported Eulalius, and the Emperor Honorius supported Boniface, who was enthroned after the council. Boniface condemned Pelagianism and encouraged St. Augustine to write against it. When Boniface died in 422, he was buried in a chapel which he had built in the cemetary of St. Felicity.

Continue reading about St. Boniface I
Posted by Deacon Mike Talbot at 8:57 PM