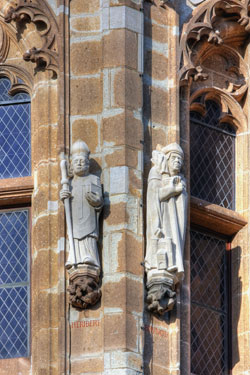 Archbishop of Cologne, Germany, and chancellor of Emperor Otto III . He was born in Worms, where he was ordained after being educated by the Benedictines of Gorze in Lorraine, France. Serving Otto III, Heribert was made an archbishop on 998. Heribert accompanied Otto to Italy in 1002, and brought the emperor's body back to Aachen when Otto died. He also served Emperor St. Henry. Heribert built the monastery of Deutz, on the Rhine and performed miracles, includ­ing ending a drought. He is thus invoked for rains. He died in Cologne on March 16, and was buried at Deutz. Heribert was canonized by Pope St. Gregory VII about 1074. Feast day: March 16. Herlindis  With Relindis, Benedictine abbesses, the daughters of Count Adelard, who built them a convent at Maaseik on the Meuse, Belgium. These saints were friends of Sts. Willibrord and Boniface.