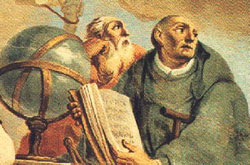 Herman was born a cripple in Altshausen, Swabia. He was so terribly deformed he was almost helpless. He was placed in Reichenau Abbey in Lake Constance Switzerland, in 1020 when he was seven and spent all his life there. He was professed at twenty, became known to scholars all over Europe for his keen mind, wrote the hymns Salve Regina and Alma Redemptoris mater to Our Lady, poetry, a universal chronicle, and a mathematical treatise. He died at Reichenau on September 21 and is sometimes called Herman Contractus.