Another great Saint for this Monday from the Philippines 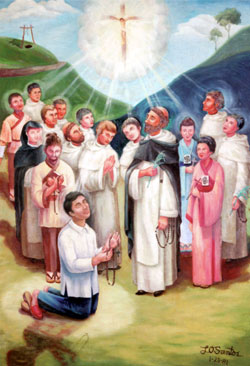 Martyr of Japan with Michael Aozaraza, Anthony Gonzales, William Cowtet, Vincent Shiwozuka, and Lazarus. Lawrence was born in Manila, the Philippines. He and his companions were tortured and slain on Okinawa. They were beatified by John Paul II in 1981 and canonized in 1987.