Sunday Saint was particularly devoted to the Blessed Sacrament 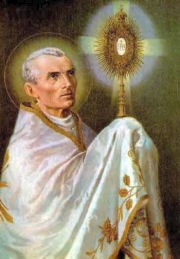 1811-1868, Founder. Born in LaMure, France, he worked at his father's trade as cutler until eighteen when he went to the seminary at Grenoble and was ordained in 1834. He served as a parish priest for several years then joined the Marists and in 1845 became their provincial at Lyons. He established the Sevants of the Blessed Sacrament whose nuns devoted themselves to perpetual adoration.