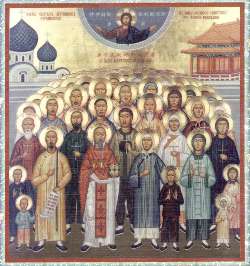 
Chinese Martyrs is the name given to a number of members of the Catholic Church and the Eastern Orthodox Church who were killed in China during the 19th and early 20th centuries. They are celebrated as martyrs by their respective churches. Most were Chinese laity, but others were missionaries from various other countries; many of them died during the Boxer Rebellion.

He was a Chinese soldier, converted and became a Catholic Priest
Posted by Deacon Mike Talbot at 8:41 PM