October 31 and it will be Blessed Father McGivney

KofC founder to be beatified October 31; other beatifications postponed 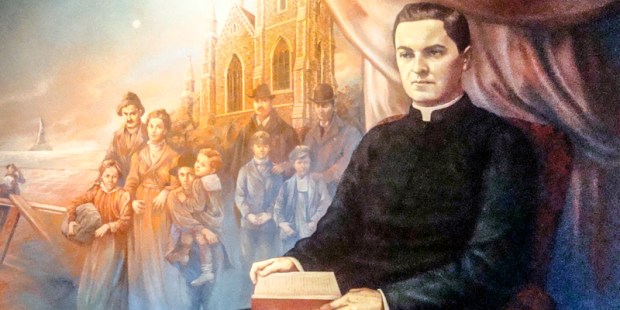 The beatification Mass for the American priest Michael McGivney, founder of the Knights of Columbus, is scheduled for October 31 in Connecticut, according to the Congregation for Saints’ Causes.
The date was communicated in a Tweet, which also announced that due to the coronavirus, the beatifications of Benigna Cardoso and of the missionary priest Giuseppe Ambrosoli, respectively scheduled for October 21 and November 22, are postponed.

Read more:
Little boy healed through prayers of Fr. McGivney is “like a kiss from Jesus”
Benigna Cardoso (1928-1941) was to be proclaimed blessed in the cathedral of Crato (Brazil). She was killed at age 13 when she resisted rape.

Read more:
“Another Maria Goretti” will be beatified in Brazil
The beatification Mass of the Italian Giuseppe Ambrosoli (1923-1987), a missionary in Uganda, was to take place in his mission land in Kalongo.
This is the second time that the Congregation for Saints’ Causes has postponed beatifications because of the pandemic.
In April, it postponed sine die all those planned for the month of June. Among the seven people whose beatifications are on hold is Cardinal Stefan Wyszyński, a close friend of John Paul II, initially scheduled for June 7 in Warsaw (Poland).

Read more:
List of Saints from the United States of America
Father McGivney could become the first man born in the United States ever to be elevated to sainthood.
Three women born in the country have been canonized: St. Elizabeth Ann Bayley Seton in 1975, St. Katharine Drexel in 2000 and St. Kateri Tekakwitha in 2012.
There are other male US-born “blesseds”: Stanley Rother and James Miller, both martyrs, and Blessed Solanus Casey.