The importance and necessity of the Glory Be Prayer

THE GLORY BE PRAYER 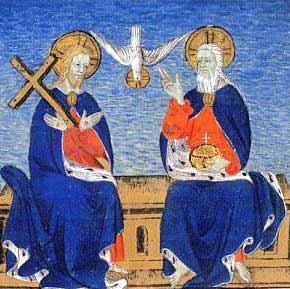 THIS WEB PAGE IS ALSO AVAILABLE AS A PODCAST HERE.
The Glory Be prayer is most familiar from the Rosary where it is recited at the end of each decade of the Hail Mary. It goes back many centuries and is known also by its Latin name and version as the Gloria Patri (Glory Be to the Father). It is also referred to in some older prayer books and scholarly writings as a doxology (which is a fancy name for a short expression of praise for God).
The tradition for the doxology comes from the Jewish synagogues. St. Paul often used doxologies similar to the Glory Be in his letters. For example: he referred to “the only wise God, through Jesus Christ, be honor forever and ever. Amen.” in the conclusion of his letter to the Romans (Rom 16:27).
Centuries later, in 1608, the famous bishop St. Francis de Sales ended his classic book Introduction to the Devout Life in a similar fashion: “Glory be to Jesus, to Whom, with the Father and the Holy Ghost, be honour and glory, now and ever, and to all Eternity. Amen.” Notice how this sentiment resounds in the Glory Be itself:
Glory be to the Father,
And to the Son,
And to the Holy Spirit.
As it was in the beginning, is now,
And ever shall be,
World without end. Amen.

Many people make the sign of the cross when reciting this prayer or one of its variants which the priest says at the start of Mass: “In the name of the Father, and of the Son and of the Holy Spirit, Amen.”
The Glory Be prayer reaffirms the eternal glory of our “God in Three Persons, Blessed Trinity,” as our Triune God is called in the well known hymn Holy Holy Holy. Let us try each day, in reciting this prayer and others, to be open to God’s graces, so that we may live our lives as hymns of praise to Our Creator.