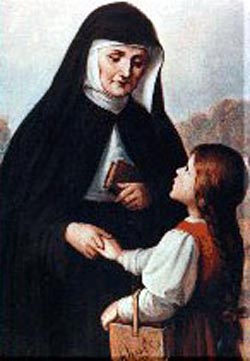 Blessed Mary Theresa was born Caroline Gerhardinger in Bavaria in 1797. Encouraged by her parish priest to become a teacher, she believed strongly that a child's need for love, safety and food were as important as formal education. "Let us never forget the love of Jesus for children, whom he took upon his lap and blessed," she said.
Caroline gradually recognized God's call to found a religious community which would remedy the social situation through education. Her life work, helping women and children grow to their greatest potential, was a founding principle of the School Sisters of Notre Dame. She brought the order and the mission of educating girls to America, following the wave of German immigration. Within a year, they established a presence in seven cities.
Mother Theresa died in 1879. At that time, her congregation numbered more than 2500. They met the needs of their time by educating girls in elementary schools, orphanages, industrial schools and day nurseries and pioneered in the development of the Kindergarten. For girls working in factories, they provided homes and night schools where they could receive a basic education.
While most religious orders of her time were governed by men, she was convinced that a woman could better understand, direct and motivate her sisters. The Constitution of the School Sisters of Notre Dame, approved by Pope Pius IX in 1865, allowed Mother Theresa and her successors, rather than local bishops, to govern the congregation.

Mary Theresa of Jesus was beatified in 1985, and is now known as Blessed Theresa.
Posted by Deacon Mike Talbot at 8:38 PM