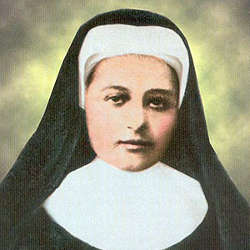 Eugenia Joubert - French nun, virgin, a blessed of the Roman Catholic Church
She was born in a devout and relatively large family of French Christians. Her parents were Peter and Antonia Joubert Celle. She was the fourth of eight children. At the age of 12, she had her First Holy Communion in her hometown of Sisters Józefitek. From 1889-1892, she attended college in Le Puy run by the Sisters of Notre Dame. In 1895, she entered the Congregation of the Sisters of the Holy Family of the Heart of Jesus, and two years obtained her religious vows. She taught catechism to children, first in Aubervilliers, near Paris, then in Saint Denis, where she exercised her novitiate, Le Puy and in Liege in Belgium today.
Since 1902, Eugenia struggled with tuberculosis. She died two months after her return to Liege at the age of 28 years old.