He brought Catholicism to California 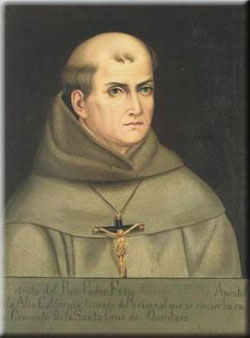 Miguel Jose Serra was born on the island of Majorca on November 24, 1713, and took the name of Junipero when in 1730, he entered the Franciscan Order. Ordained in 1737, he taught philosophy and theology at the University of Padua until 1749.
At the age of thirty-seven, he landed in Mexico City on January 1, 1750, and spent the rest of his life working for the conversion of the peoples of the New World.
In 1768, Father Serra took over the missions of the Jesuits (who had been wrongly expelled by the government)in the Mexican province of Lower California and Upper California (modern day California). An indefatigable worker, Serra was in large part responsible for the foundation and spread of the Church on the West Coast of the United States when it was still mission territory.
He founded twenty-one missions and converted thousands of Indians. The converts were taught sound methods of agriculture, cattle raising, and arts and crafts.
Junipero was a dedicated religious and missionary. He was imbued with a penitential spirit and practiced austerity in sleep, eating, and other activities. On August 28, 1784, worn out by his apostolic labors, Father Serra was called to his eternal rest. He was beatified by Pope John Paul II on September 25, 1988. His statue, representing the state of California, is in National Statuary Hall. His feast day is July 1.