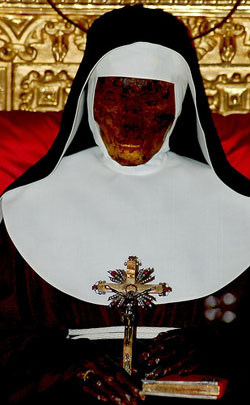 
Take the Saints Trivia Quiz now!
St. Catherine of Bologna was an Italian nun and artist born as Catherine de' Vigri on September 8, 1413 in Bologna, Italy.
She was the member of an aristocratic family and the daughter of a diplomat to the Marquis of Ferrara. Catherine received a wonderful education in reading, writing, singing and drawing while being raised at the court of the Duke of Ferrara. Catherine excelled in painting, Latin and the viola.
When the daughter eventually married, she wanted Catherine to remain in her service, but Catherine, feeling a calling to the religious life, left the court.
In 1426, at 13-years-old, she entered the convent of Corpus Domini at Ferrara and became a Franciscan Tertiary.
During this time, her convent disagreed in whether to continue following the Augustinian rule or to instead adhere to the Franciscan rule. A Rule is a specific expression of the Christian life which calls the men or women of a particular religious order to a daily pattern of prayer, work and charity.
Catherine was determined to live a life of perfection, and was admired by her companions for her holiness.
In 1432, Catherine and other young women of Ferrara founded a monastery of the Order of Poor Clares, an order founded by St. Francis and St. Clare of Assisi.
Catherine was openly willing to serve the more humble roles in the convent. She was a laundress, a baker and a caretaker for the animals.
Through her efforts with Pope Nicholas V, the Poor Clare convent at Ferrara erected an enclosure, and Catherine was appointed Superioress. That office made her responsible for providing pastoral care and spiritual oversight to all of sisters. The reputation of the Community for its holiness and austerity became widespread.
In 1456, Catherine returned to Bologna with her superiors and the governors there requested she found a second monastery of the same Order and be the Abbess of the convent.
Catherine continued to paint and to write beautiful spiritual guides and poetry. She wrote the Treatise on the 7 Spiritual Weapons Necessary for Spiritual Warfare. And, her painting of St. Ursula remains on display in a Venice gallery.
Throughout her life, Catherine experienced visions of both Jesus Christ and Satan, which she documented in her treatise. In one instance, she had the baby Jesus placed in her arms by the Blessed Virgin Mary.
During the Lenten season of 1463, Catherine became seriously ill, and on March 9th she passed away.
She was buried without a coffin and her body was exhumed eighteen days later because of many cures attributed to her at her graveside and the sweet scent coming from her grave. Her body was discovered incorrupt and remains so today. That means it has not decayed. Catherine is dressed in her religious habit seated upright on a golden throne behind glass in the chapel of the Poor Clares in Bologna.
Her skin has since been blackened due to exposure from oil lamps and soot.
Saint Catherine was beatified in 1524 by Pope Clement VII and canonized on May 22, 1712 by Pope Clement XI. She is the patron saint of artists, the liberal arts, against temptations and of Bologna.
Her feast day is celebrated on March 9.
St. Catherine's piety, charity, and kindness attracted many to follow her along the road to Christian perfection. The beauty of her life and death encourages us to live in perfect charity as a Lenten goal.
Pope Benedict described this humble saint as, "From the distance of so many centuries she is still very modern and speaks to our lives. She, like us, suffered temptations, she suffered the temptations of disbelief, of sensuality, of a difficult spiritual struggle. She felt forsaken by God, she found herself in the darkness of faith. Yet in all these situations she was always holding the Lord's hand, she did not leave him, she did not abandon him. And walking hand in hand with the Lord, she walked on the right path and found the way of light."